Black History is more than a month! 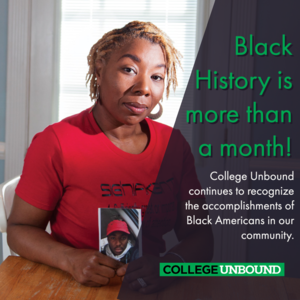 College Unbound is taking the time to focus on the accomplishments of Black
Americans in our community.
This month, we continue recognition by celebrating one of our own, Shawndell-Burney Speaks. Shawndell is a College Unbound student and a senior advisor to Mayor Jorge Elorza. As the leader of the mayor’s African American Ambassadors Group, Burney-Speaks has been influential in the push to remove the term plantations from all city documents and oath ceremonies. On the 155th anniversary of Juneteeth, which commemorates the ending of slavery in the United States, the group was influential in prompting the city to raise the Pan-African flag on City Hall. At the request of the group, Mayor Elorza ordered the removal of the Christopher Columbus statue from the Elmwood neighborhood.
Improving the health and well-being of her community has been a lifelong passion of Shawndell Burney-Speaks. She has worked with inner city youth and their families for over 20 years. Shawndell has done work with the Institute for the Study and Practice of Nonviolence (ISPN), and has been a Coordinator for the Beloved Community Summer Jobs Program at ISPN.
Shawndell established her first girls group with a group of women at ISPN and then transitioned to after school programs and working with young ladies in both middle and high school in the Providence Public School system from 2009-2013. She has also worked as an Intervention Specialist in the Providence Public School system where she helped significantly increase graduation rates at Juanita Sanchez High School.
Shawndell presented her first Ted Talk on the TedX Providence stage in 2017. She was inducted into the Dr. Martin Luther King Jr. Hall of Fame in 2019 for her community advocacy. Shawndell most recently received the Rosa Parks award from the NAACP 106th Freedom Fund Gala, from the NAACP Providence Chapter.
Burney-Speaks is a Certified Life Coach, and creator of S.Burney-Speaks Life, where she specializes in providing services for individuals and groups. As a Public Speaker and Workshop Facilitator Shawndell understands the daily struggles of those in her community. Following the tragic loss of her son to gun violence, Shawndell founded a prayer initiative group called Corporate Prayer New England. The group prays on the 1st Monday of every month with community members as well as the Faith community. Shawndell and her group believe their efforts have changed murder rates in the city of Providence drastically. The decline in murder rates was mentioned in the Boston Globe. The group attributes the change to the power of prayer.
Shawndell Burney-Speaks, College Unbound salutes you for your tireless efforts to continue to make our community a better place!
You can follow Shawndell on Facebook @sburneyspeakslife and Instagram @shawniespeaks1121
https://www.facebook.com/collegeunbound/posts/10158130904028321